HOMELANDS is a collective of young and established First Nations artists and ally’s from different nations and cultures who come together to connect through story, song and music. 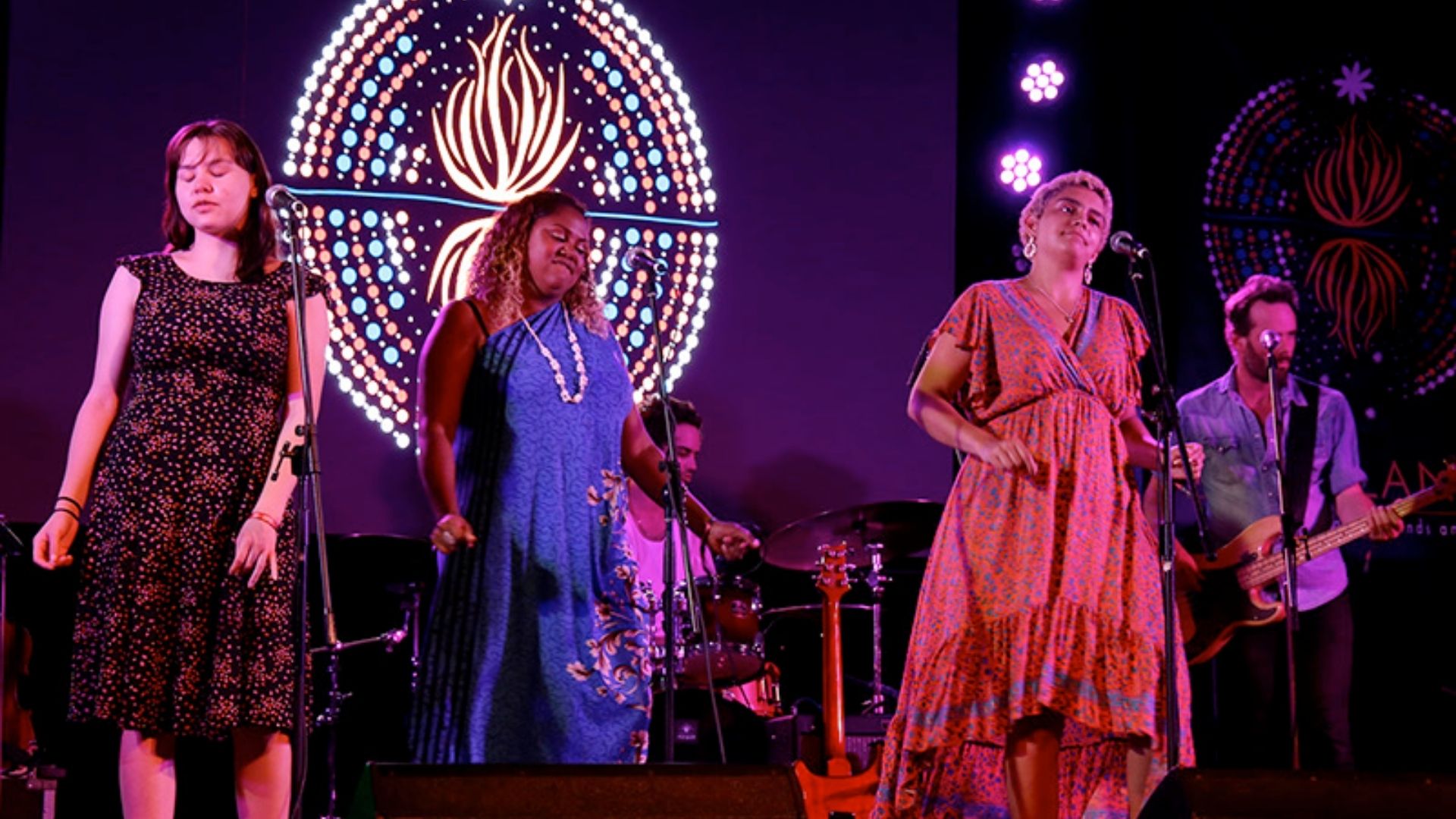 HOMELANDS Collective mentors young First Nations people to strengthen their cultural identity and connection to country and community, and to provide ongoing support in their wellbeing and healing as they follow their music career and cultural journeys.

The project encompasses two streams: ‘Yanguuwii’ (Sacred Fire), and ‘Wiibiyaay’ (‘Firestick’). ‘Yanguuwii’ is a songwriting and music mentoring program, delivered in person and online, that deepens connection, belonging and healing through cultural expression by supporting young First Nations artists to have their voices heard and by building a network of ongoing support to continue their career and cultural journeys. ‘Wiibiyaay’ features local and international guest artists who come together in the songwriters’ circle to weave their stories together and to connect in a genre-fused and campfire-fueled finale. A coming together of nations, artists and audiences, to find the points of connection that unite us all through music.

A holistic foundation centred around the continuity of the sacred fire circle, grounds all that HOMELANDS and the collective of artists do. The seven teachings of Love, Respect, Courage, Honesty, Wisdom, Humility and Truth guide the project values and principles and determines the agreements made between the collective of artists and collaborative organisations, their families and communities.

HOMELANDS is inclusive of all peoples and cultures across the globe – an open invitation to other cultures and peoples to come and sit at the circle to heal ourselves and our Homelands through music.

Artwork story: HOMELANDS artwork depicts the sacred fire under the night sky, reflected across oceans from the northern star to the southern hemisphere. The artwork is designed by Heidi Ledwell and adapted from Nhunggaburra Elder Tex Skuthorpe’s original painting ‘A Story about Nhunggal Country’.

‘Yanguuwii’ (Sacred Fire) is a songwriting and music mentoring program that can be delivered both in-person and online, that deepens connection, belonging and healing through cultural expression by supporting young First Nations people to have their voices heard and by building a network of ongoing support to continue their career and cultural journeys.

Yanguuwii is guided by the work of collaborators and music mentors, as part of the LOVE and HOPE campaign at the World Indigenous Suicide Prevention Conference in Perth, Western Australia in 2018.

A collective of young Indigenous people and their music mentors co-wrote and released a song and music video about connection and belonging entitled LOVE and HOPE, encouraging the wider community to listen with their hearts to the lived experiences of Indigenous young people, their friends, families and communities to address the impacts of racism and the alarming rates of Indigenous youth suicide. The song was recorded across multiple locations in Australia and Canada, ensuring the connection between the young people and also the Collective continued.

Homelands Collective is reaching out across oceans to encourage young First Nations people around the world, to connect through story, song and music by joining the Yunguuwii (Sacred Fire) – Virtual Circle.

The fire is lit. The embers glowing. To guide us home. Come join the Circle.

Gamilaraay, Kooma, Muruwari woman (NSW and QLD, AUS), singer-songwriter, actor, multi-disciplinary artist and song woman MAURIAL SPEARIM is an acting graduate from the Victorian College of the Arts.  Maurial is feature artist and co-producer with HOMELANDS and has many years experience designing and delivering programs for young First Nations people. Maurial weaves her powerful contemporary voice and ancient language to command your attention and ignite your soul. Maurial released her first single Blak Woman in July 2018, followed by single Sardine Baby in 2021 ahead of the release of her debut album ‘Dhi Ngay Gii’ (From My Heart).

KATIE SYMES was raised and lives on the wilderness coast in Mallacoota, south eastern Australia and is HOMELANDS (AUS) co-producer. Katie is currently Bushfire Recovery Hub Co-Coordinator and Regional Music Victoria Far East Co-Coordinator.  Until recently Katie was Campaign Manager, Culture is Life and Communications Consultant, Centre of Best Practice in Aboriginal and Torres Strait Islander Suicide Prevention (CBPATSISP). With 20 + years experience in the not-for-profit, music and cultural sectors as a producer and manager delivering large scale projects and campaigns both in remote communities and internationally, Katie has made a lifetime commitment to supporting social change for First Nations young people and the broader community.

Homelands Collective is deeply grateful to all the artists who form the Collective and to the contributors who have been part of the journey so far, and acknowledges the generous support from Culture is Life, a not-for-profit that deepens connections and belonging by backing Aboriginal and Torres Strait Islander led solutions to prevent youth suicide and to support young people to thrive.

Culture is Life recognises the complexity of the issue and the interplay of social, cultural and systemic determinants of health that heighten the risk of suicide. Drawing on growing evidence that cultural strength influences the health and well-being of First Nations peoples globally as a protective factor, Culture is Life backs Aboriginal-led solutions that deepen connection to culture and country for Aboriginal young people.