After watching the documentary Utopia years ago, and learning about the true history of Rottnest Island, or Wadjemup as it’s called in Noongar language, I thought this was a place that I would never visit. 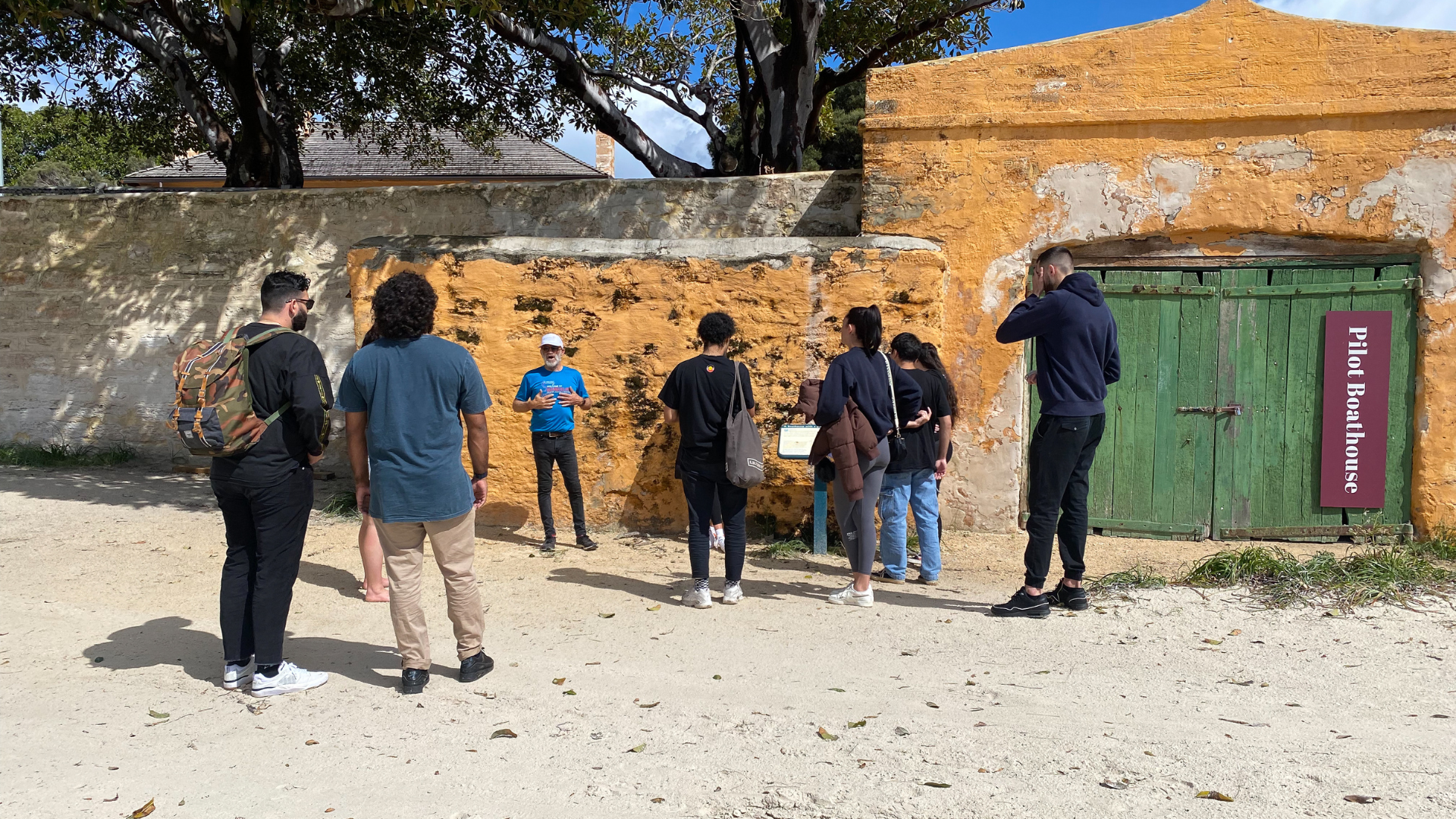 After watching the documentary Utopia years ago, and learning about the true history of Rottnest Island, or Wadjemup as it’s called in Noongar language, I thought this was a place that I would never visit. To my knowledge, Wadjemup is the largest deaths in custody site in this country. For almost 100 years from 1838-1931, Wadjemup was used as a prison labour camp to segregate and incarcerate over 4000 Aboriginal men from WA. The Island was built by Aboriginal men, and you can still see many remnants of the island’s true purpose and history if you look closely. Of those forcibly taken and imprisoned on the island, 373 Aboriginal men died there, and still lie in unmarked graves on the island.

During our 2022 Culture is Life Fullaship Program intensive to Boorloo/Perth, on Whadjuk Noongar Boodja, Uncle Len Collard who welcomed us to Kings Park in Boorloo with a welcome and smoking, also led the group on a cultural tour to Wadjemup. Uncle Len Collard is a Noongar Elder, educator, and consultant who is a kind, easy-going, intelligent and funny man. Uncle Len helped me to reframe my thoughts of Wadjemup, and without him making us feel safe, welcomed and protected on our visit to the island, I doubt I would have ever had the courage to visit. Under the guidance of Uncle Len I felt culturally and spiritually safe, always ensuring to walk respectfully, with light feet.

It was bizarre to see international and non-Indigenous tourists, riding bikes around the island (it’s one of the main modes of transport), sitting in cafes sipping lattes, taking photos, and hanging with the Quokkas, either with no idea, or maybe just no care regarding the true history of the island. It was a stark contrast to seeing our group visiting sites around the island with Uncle Len, quiet and sombre, while people screamed around on bicycles without a care in the world. If you knew where to look, there were many remnants of the old people who used to walk on the Island. 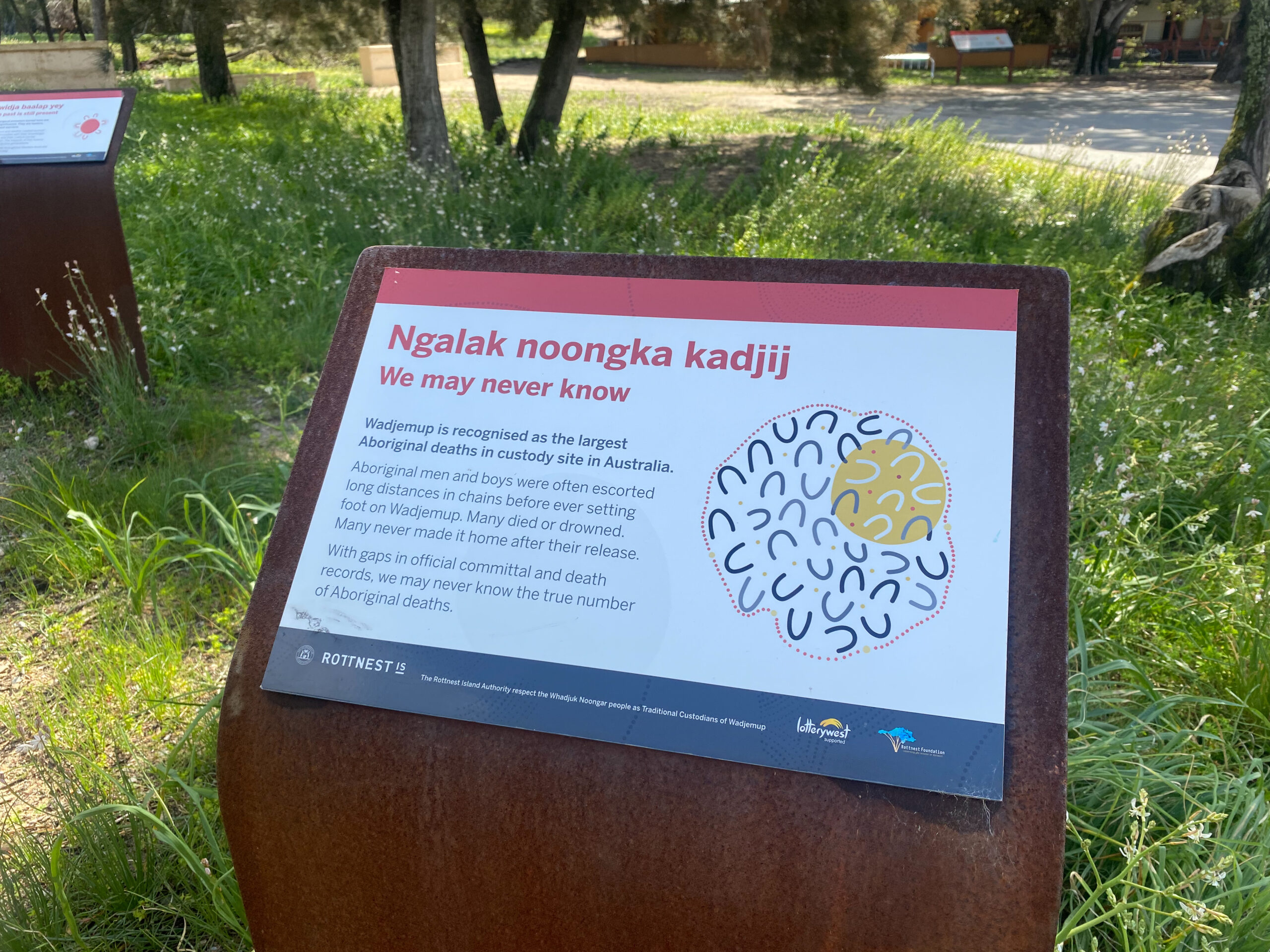 Where there was struggle, darkness and pain, there was also great strength, resilience and culture that shone through. We travelled to a site where the men would make tools, including spears from natural and contemporary materials, such as thick colonial glass. On Sunday, their one day of ‘freedom’, the men would travel to different parts of the island to practise their culture, hunt and fish, seeking reprieve from the harsh realities of life on Wadjemup. I realised that while on the South East Coast, we have the likes of Captain Cook and Arthur Phillips, WA has its own history and stories. Throughout our visit, Uncle Len enabled me to realise that these men were the first line of defence against colonisation in WA – they were warriors. This wasn’t just a sad place, but a place of Blak strength and resilience.

These men who were imprisoned in a labour camp that they had to build, also showed incredible resilience to survive, and practice culture, using their small freedoms to socialise, hunt, fish and create. Unc Len enabled me to realise that the 373 Aboriginal men that died on that Island, buried in unmarked graves, deserved to be remembered, respected, thanked, and visited. They had been conveniently forgotten by mainstream, non-Indigenous society, and had their final resting place desecrated and disrespected by tourism. Even their old living quarters, where some men likely breathed their last breaths, had been turned into premium priced tourism accommodation. The least we could do is pay those old fullas a visit, and let them know that they were not forgotten. Mudga yinda (thankyou) Uncle Len.

In my family, Kunja language hasn’t been spoken for a long time. Even my Great Uncle Albert ‘Doc’ Martin, from Bourke NSW, doesn’t recall his father or Grandfather speaking language, apart from a few bits and pieces. This is a huge deliberate impact of colonisation that affects our cultural identity and connections to stories, Country and Culture. Unfortunately, I did not grow up singing my peoples songs, stomping to our dances, or speaking our language. However, understanding this, I aspire to help contribute to Kunja language revival, using preserved language found in linguistics textbooks. If it wasn’t for a conversation in passing with Doug Marmion, a linguist at AIATSIS, I might never have found these texts. I’ve had to fight my whole life for access to culture, family, information, language, dance, and song. Although I am only an infant on my lifelong cultural journey, it is important to me that I have something to pass on to my kids one day. So that they don’t have to do the work I have done, and so that they know from day one who they are and where they come from. There is so much power in our languages, cultures and Country, and this is why they tried to rid us of our connection. Yet, we are still here.

It was an amazing opportunity to be a part of the Culture is Life team as the Youth Adviser for the Australian Wars project. As part of this project, I contributed to the development of the curriculum-aligned educational resources that accompanied the Australian Wars series. This included designing classroom activities and questions for students to critically engage with the content. I was fortunate to watch all 3 episodes of the Australian Wars before the broadcast, and instantly, I knew this would be something big. Getting to work on a project with Rachel Perkins and Blackfella Films was a huge honour. And working under the leadership of Shelley Ware, the Education Lead at Culture is Life was a great experience. Shelley is a woman with a wealth of knowledge and experience, and I appreciated being able work with, and learn from her over the course of this project. I’m thankful for the opportunity, and I hope everyone watches the series, and checks out the educational resources on SBS Learn and the Culture is Life website. 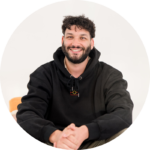 2022 Fellow from The Fullaship Program